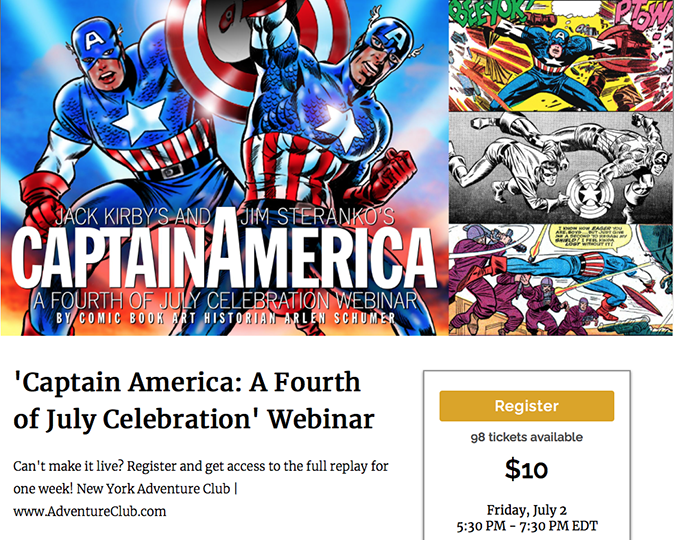 What better way to celebrate the Fourth of July than with the two greatest versions of the ultimate patriotic superhero, Captain America?

After the creations of Superman (1938) and Batman (1939), the third-most iconic superhero, Captain America, was created in the spring of 1941 by two young comic book cartoonists, Joe Simon and Jack Kirby, who wanted to raise the isolationist-consciousness of the American public about the fascist threat from the raging Second World War’s Axis powers. Simon and Kirby succeeded beyond their wildest dreams, as Captain America not only became an overnight success, selling millions of copies per issue, but publisher Marvel Comics (then known as Timely) even dressed up an actor as the good Captain to stump for war bonds!

But after the War ended, Captain America, like all the superheroes of the era, fell out of favor with the comic book audience, who turned to other genres like humor, western, crime and, into the 1950s, horror and science fiction. But Captain America co-creator Kirby, who had a career renaissance in the 1960s with Marvel, spearheading its new superhero line, brought him out from “retirement” in 1964 and into new life as the unquestioned “captain” of the Marvel Universe. His version of Captain America in The Sixties is considered the definitive run of the character in its history.

Except for one other, at the tail end of the decade, by Kirby’s greatest influencee, the writer and artist Jim Steranko. His meteoric rise at Marvel, beginning in 1967 on Kirby’s James Bond-like character, Nick Fury, Agent of S.H.I.E.L.D., labeled Steranko the Jimi Hendrix of Comics for his equivalent experimentation and psychedelic artwork. In 1969, Steranko set his sights on paying homage to his hero Kirby’s Captain America, creating a three- issue story arc that many comic book historians consider the single high water mark of the character’s entire history.

So come join New York Adventure Club and comic book art historian Arlen Schumer (author/designer, The Silver Age of Comic Book Art) as he presents an overview of both creators’ masterful takes on Captain America—you’ll see comic book panels, pages and covers in a way that will make you see them as if for the first time!