As much as the original superheroes themselves, New York City itself has played a prominent role in the history of American comic art! The famous skyline, buildings, and environment of New York City have been as much a part of American comic art history as any of its most famous characters and superheroes who lived in it, and whose exploits and adventures took place there. The very first modern American comic strip appearing in 1895, Richard Outcault’s The Yellow Kid, took place in the immigrant tenement slums of the City.

And up through the 20th Century and the evolution of the comic book and the genre most associated with it, the superhero, New York City would be the setting for so many of its super-powered protagonists, even if they lived in thinly-disguised versions of the City, like Superman’s Metropolis and Batman’s Gotham City.

CAN’T make it LIVE? Buying a ticket allows you access to a recording of the webinar for up to a week after! 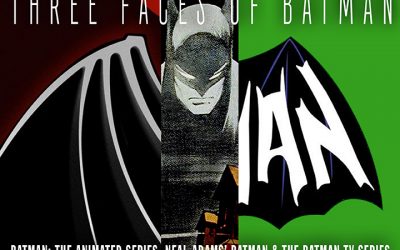 BATMAN, the most popular superhero in the world (despite not being ‘super’), debuted in the month of May, 1939—and since then, there have been so many different, yet equally loved, iterations of the character over its 80+ year history. This is the story of Batman, told through the lens of three different media: comics, animation, and television!

CAN’T make the webinar LIVE? Buying a ticket lets you to watch a recording of it the webinar for up to a week after!

Of all the giants of the comic book art medium, Joe Kubert’s unmistakable and unforgettable style made him perhaps the most expressive pen-and-brush artist of his generation!

In the early ’60s, Kubert maintained continuity with his ’40s roots by returning to Hawkman, a character rendered by many artists since, but given his most definitive treatment by Kubert, despite a brief run of only six issues.

So come join illustrator and comic book art historian Arlen Schumer (author/designer, The Silver Age of Comic Book Art) as he presents an overview of Kubert’s illustrious career, dynamically displaying his comic book panels, pages and covers so that you’ll feel like you’re seeing them for the first time!

***CAN’T make it LIVE? Don’t worry–you’ll be able to watch a recording of the live webinar later!

You’ve WATCHED the Sean Connery James Bond films for 60 years—now SEE them for the FIRST time!
In my FREE webinar series, THE SEAN CONNERY BOND CANON: THE FIRST FOUR FILMS, I present multimedia overviews that feature:
•Hard to find behind-the-scenes production photos and documentary films–often shot by BOND crew members themselves!
•Rare advertising films and promotional materials!
•The “greatest hits”—film clips and stills—from each Connery classic!
In this 2nd installment, 1963’s FROM RUSSIA WITH LOVE, on WEDNESDAY, APRIL 21 @ 6:00pm EST, you’ll learn:
• Why RUSSIA should be considered the true “first” Bond film, not DR. NO
• Why Maurice Binder did not design RUSSIA’S innovative film titles—and how one Robert Brownjohn came to do them instead
•Why the director of RUSSIA, Terence Young, is perhaps more responsible for the shaping of the cinematic version of Bond than his literary creator, Ian Fleming!
So you’ll not only “see” the first 4 Connery Bond films in a fresh, new light, but, through my commentary and insight, you’ll also appreciate them anew in the context of their times, as the beginnings of the modern action film, and part and parcel of the creative pop culture explosion that was the 1960s!
ZOOM Meeting: https://bit.ly/3mEd5iB
MEETING ID: 844 6561 2531
PASSCODE: 289968
***CAN’T make it LIVE? Don’t worry–you’ll be able to watch a recording of the live webinar later!

IS IT POSSIBLE to compare the fabled historic works of fine art with the more modern works of comic book art?

So join New York Adventure Club and comic book-style illustrator and historian Arlen Schumer (author/designer, The Silver Age of Comic Book Art) as we embark on a fascinating journey that examines the great artists within the fine art and comic book art worlds, and how similar — or different — their artworks are!

***Can’t make it LIVE? Register and get access to the full replay for one week!

WHY HAS POP ART— a movement initially ridiculed by art critics and historians — outlasted them all to become, arguably, modern art’s most “modern” art?

Come to “The Origins of Pop Art: The Most Modern Art” webinar by Arlen Schumer via New York Adventure Club and find out!

This is the story of the 20th century’s most controversial art style, from the early days of being labeled as mere artistic plagiarism, to eventually commanding some of the highest art auction prices in the entire art world.

Join New York Adventure Club and illustrator & pop culture historian Arlen Schumer (author/designer, The Silver Age of Comic Book Art), as we explore the history of Pop Art, and analyze the foundational works and artists — like Roy Lichtenstein, Andy Warhol, and Mel Ramos — that have come to define its style. It’ll make you see Pop Art as if for the first time!

***Can’t make it LIVE? Register and get access to the full replay for one week!

What Elvis was to rock & roll—what Babe Ruth was to baseball—what Picasso was to Modern Art—Jack Kirby was to comic book art!

• Kirby created and co-created a nearly endless stream of characters and concepts, from Captain America and nearly all the Marvel Universe superheroes to The New Gods and The Eternals, that now form the foundations of American film and television empires;

• He defined his own graphic vocabulary, much like D.W. Griffith did for film, that has influenced generations of artists, writers and storytellers.

But as great as Kirby’s successes were, he himself is also one of the greatest victims of the corporate system that denied a creator ownership of his creations. And therein lies the heart of the Kirby story: his comics, his creations, his credit.

In this third installment of THE GREA T COMIC BOOK ARTISTS OF THE SILVER AGE webinar series by comic book art historian Arlen Schumer (author/designer, The Silver Age of Comic Book Art), running the last Wednesday of each month in 2021, each of the dozen artists’ Silver Age-era work is delved into, discussed, and boldly displayed on screen in ways that graphically communicate comic book art’s sequential, page-turning nature, so you’ll truly “see,” as if for the first time, the comics you’ve only “read” your whole life.

***CAN’T make it LIVE? Don’t worry–you’ll be able to watch a recording of the live webinar later!

“For Jor-el so loved the world he gave his only begotten son, with powers and abilities far beyond those of mortal men!”

Ever since superheroes first burst upon the American scene in the late 1930s, they have always used their mighty super powers defending the causes of “truth, justice and the American way,” to quote the famous motto of the first superhero, Superman.

But there is something more, something embedded in the superhero mythos that goes deeper than their surface feats of derring-do. Because for all of their mighty displays of super-strength, speed, flight, heightened senses or occult, supernatural powers, the greatest superpower of them all is the power of love: the love every superhero has for the people they’re protecting from harm or rescuing from the forces of evil.

Some of the most memorable stories in the history of comics have been about superheroes sacrificing their lives for their friends, families, or mankind itself. “There is no greater love than to lay down one’s life for one’s friends,” from John 15:13, is one of the most memorable passages in The New T estament.

Join New York Adventure Club and award-winning comic book-style illustrator and historian Arlen Schumer (author/designer, The Silver Age of Comic Book Art) as we explore how superheroes in American comic book history have always reflected Christological aspects of heroism and self-sacrifice, whether overtly or unconsciously, in this uplifting webinar filled with stylized images from both comic book history and the broader popular culture.

•••CAN’T MAKE IT LIVE? Register and get access to the full replay for one week!

American Jews not only created the original superheroes—they created the American comic book itself! “The People of The Book” became “The people of the comic book”!

One day in 1933, newspaper publisher Max Gaines (nee Ginzburg) came up with a novel idea: he took some pages of his tabloid-sized Sunday newspaper comics, folded them over twice, and stapled them on the side—creating the comic book as we know it! That same year, two 18-year-old aspiring newspaper cartoonists from Cleveland, writer Jerry Siegel and artist Joe Shuster, created a character whom they hoped to sell to the very newspaper syndicates who worked with Gaines: Superman! And the rest, as they say, is history!

Thus began the history of comic books and superheroes, largely created by American Jews like Gaines, Siegel and Shuster, for their innovations sparked a 20th Century American pop culture explosion that has only gained in prominence and stature here in the 21st Century!

So join New York Adventure Club and award-winning comic book-style illustrator and historian Arlen Schumer (author/designer, The Silver Age of Comic Book Art) as we explore the specific Jewish creation of the American superhero and its antecedents in older, ancient myths—from Ben Grimm to the Golem—as well as the significant contributions Jews have made to the medium of comic book art itself, in this uplifting webinar filled with stylized images from both comic book history and the broader popular culture!

TIX: https://www.nyadventureclub.com/event/jews-comics-the-outsized-jewish-influence-on-comic-history-webinar-registration-142486869061/
***Can’t make it live? Register and get access to the full replay for one week!
« Older Entries