The body of work NEAL ADAMS (1941-2022) produced in his lifetime caused something akin to a revolution in the look of comic book art itself.

Adams’ unique blend of dynamic anatomy and photographic realism made the fantasy worlds of superheroes visually believable in ways never before seen. His heroes walked, ran, leapt and flew in smooth, flowing movements that belied their superhuman bulk; cartoony, stock expressions were replaced with a full range of human emotions. As Adams once said, “If superheroes really existed, they would look like the way i draw them.”

During the late1960s and early ’70s, Adams forged new, definitive artistic identities for several of DC and Marvel Comics’ leading characters, including Batman and The X-Men. Without Adams’ groundbreaking versions, neither would be the multimillion dollar franchise they are today.

The cumulative effect of Adams’ visual acuity enabled his writer collaborators to break new ground telling the kinds of stories that could be told in comic books, and in doing so, impacted an entire generation of today’s comic creatives. For Neal Adams is the bridge between the 20th Century and, with its plethora of graphic styles, today’s Modern Age of comic book art.

So join comic book historian (writer/designer, The Silver Age of Comic Book Art) and Adams aficionado (editor/designer, The Neal Adams Sketchbook) Arlen Schumer (who also worked for Adams at his Continuity studio, and moderates the Facebook group Neal Adams Almanack) as he begins a series of 7 weekly Neal Adams Memorial Webinars, starting Wednesday, May 4 and continuing until June 15 (which would have been Adams’ 81st birthday) & June 22; all will start at 6:00pm EST.

Even if you’re a fellow Adams aficionado, you’ll still see Adams’ greatest works as if for the first time!

Videos of all Adams memorial webinars are on YouTube: https://www.youtube.com/user/arlen6658/videos

The series of 62 Doc Savage paperback covers that legendary illustrator James Bama painted for Bantam Books between 1964 and 1972 represent an apex in realistic figure painting of not only the 20th Century, but the entire history of the human figure in art, fine or commercial.

For Bama’s Doc Savage character—crowned with that sci-fi widow’s peak, clad in that impossibly-shredded shirt, riding jodhpurs and calf-high boots—remains, to this day, one of the most staggeringly heroic, idealized masculine figures ever visualized in any age, by any artist, in any medium.

And now pop culture historian Arlen Schumer (writer/designer, The Silver Age of Comic Book Art) has created a free webinar that takes you through Bama’s creative process, from his reference photos of the great illustrators’ model Steve Holland, who posed as Bama’s Doc Savage for all 62 covers, to many of Bama’s original paintings, shown free of all the trade dress elements of the paperback covers!

So even if you have all the Bama Doc Savage books, or you’re already a fan of Bama’s work, you’ll see his incredible Doc Savage covers as if for the first time!

One day in 1933, printing salesman Max Gaines (nee Ginzburg) came up with a novel idea for newspaper promotion: he took pages of some tabloid-sized Sunday newspaper comics, folded them over twice, and stapled them on the side—creating the comic book as we know it!

That same year, two 18-year-old aspiring newspaper cartoonists from Cleveland, writer Jerry Siegel and artist Joe Shuster, created a character whom they hoped to sell to the very newspaper syndicates who worked with Gaines: Superman! Thus began the history of comic books and superheroes, largely created by American Jews like Gaines, Siegel and Shuster, and so many others that followed!

So join comic book and pop culture historian Arlen Schumer (author/designer, The Silver Age of Comic Book Art) as he explores the specific Jewish creation of the American superhero and its antecedents in older, ancient myths—from the Golem to Ben Grimm, as it were—and how they sparked a 20th Century American pop culture explosion that has only gained in prominence and popularity here in the 21st Century! 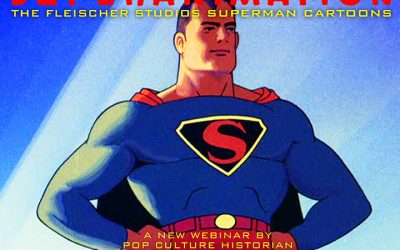 The 17 Superman cartoons produced between 1941-3 by the Fleischer Studios (of Popeye, Betty Boop and Gulliver’s Travels fame) are considered by animation historians to be the greatest realistically animated films ever made, and the greatest iteration of the Superman comic book character in any medium.

These Superman cartoons had the same smooth-flowing, higher-quality look and feel of the great Disney cartoons, due to the Fleischers’ innovating the rotoscoping technique of animating over live action film. You could feel Superman straining to exercise his super-strength, struggling against bigger opponents, be they man, machine or (giant) animal; you could feel his physical effort as he literally leapt “tall buildings in a single bound”!

So join comic book and pop culture historian Arlen Schumer (author/designer, The Silver Age of Comic Book Art) as he presents a multimedia webinar of the 17 Superman cartoons’ “Greatest Hits”—along with their behind-the-scenes production art, advertising and promotional materials!

2022 marks the 40th Anniversary of the debut of “Late Night with David Letterman,” the NBC nighttime talk show that put the young comedian from Indiana on the pop culture map, one who would shape the style and tone of late night television for decades to come!

On the occasion of “Late Night”’s 40th, photographer Marc Karzen, who shot all of the show’s “bumpers,” the still graphics of New York City scenes branded with the words “Late Night with David Letterman,” has published a handsome coffee table book containing the “greatest hits” of the “bumper” crop—and pop culture historian Arlen Schumer (author/designer, The Silver Age of Comic Book Art) will showcase Karzen’s book in this new webinar!

Schumer was one of the handful of graphic designers who hand-lettered the type treatments of “Late Night with David Letterman” integrated inventively into Karzen’s photographs, and thus will provide a first-person account what it was like to work on the groundbreaking late night show!

When people think of the signature works of the late, great Andy Warhol (1928-1987), they conjure the iconic Campbell’s soup cans and Coke bottle silkscreens, the Brillo Boxes, the Marilyns, Elvises, and numerous other celebrity portraits. But rarely do they think of his significant Superman works.

Yes, it’s Superman: not only was the Man of Steel the subject of one of Warhol’s very first Pop Art paintings in 1961— paintings that predate fellow Pop Artist Roy Lichtenstein’s first forays in the genre—but Warhol would return to the character two decades later with one of his trademark silkscreens. And in between the two? A mysterious set of Superman artworks, published posthumously in The Museum of Modern Art’s 1989 exhibition catalogue, that are actually…forgeries?

So come join comic book and pop culture historian Arlen Schumer (author/designer, The Silver Age of Comic Book Art) as he takes you on a webinar tour of Warhol’s Superman (and other comic character) artworks, dynamically displaying his works in ways that will make even the most ardent Warhol expert see them as if for the FIRST time!

What is it about Warner Bros. Animation’s 1992-5 Batman: The Animated Series that makes it, in the eyes of many Bat-aficionados, not only the best animated version of the character ever done, but the greatest translation of Batman–or any comic book character–to any another medium?

Comic book and pop culture historian Arlen Schumer (author/designer, The Silver Age of Comic Book Art) will answer that question in his new, free webinar, while showing and telling why creator Bruce Timm’s canny combination of multiple versions of the character’s comic incarnations took the animation and comic book worlds by storm when it debuted in 1992.

Dynamically displaying still images and video clips from the series, along with behind-the-scenes production art, storyboards and cel paintings, Schumer’s webinar will make you look at the Batman cartoons you’ve been watching for 30 years as if for the FIRST time!

Wednesday, March 2 @ 6:00pm EST:
WESTPORT in THE TWILIGHT ZONE free webinar!
It’s well-established that growing up in Binghamton, New York, greatly influenced the later works of the writer/creator of the legendary television series The Twilight Zone, Rod Serling—but little known of the three mid-1950s years Serling spent in Westport, Connecticut, before he moved to Hollywood in 1957.

Yet in that brief time, Serling not only came to overnight success as a television playwright, winning three Emmy Awards in a row, but experiences from those Westport years would resonate years later in some of the greatest episodes of his magnum opus.

So join Twilight Zone scholar Arlen Schumer (author/designer, Visions from The Twilight Zone) as he takes you on a guided tour, via episode clips and images from both the series and the surrounding popular culture, of an off-the-beaten path that led Rod Serling into...The Twilight Zone!

Did you know that legendary comic book creator Jack Kirby’s original design for The Black Panther was maskless, like Superman?

The circumstances surrounding The Black Panther’s change to a full mask, along with details and insight into Kirby’s origin and background for the character, and how the Panther developed over the decades—developments which were (or weren’t) translated into the groundbreaking 2018 film adaptation, as well as the forthcoming Black Panther: Wakanda Forever—will be explored by pop culture historian Arlen Schumer (author/designer, The Silver Age of Comic Book Art) in his latest free webinar, in honor of Black History Month!

Combining comic book images with those from the film, as well as the broader pop culture, Schumer’s webinar will make you look at The Black Panther—both his comic book and cinematic creations—in ways that will make you see them as if for the first time!