My BIDEN-HARRIS portraits on AltPick.com! 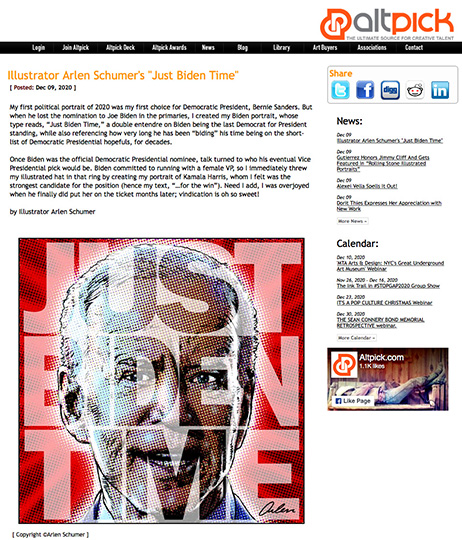 From AltPick.com, 12/9/20: https://altpick.com/news/12178
“Illustrator Arlen Schumer‘s ‘Just Biden Time'”
“My first political portrait of 2020 was my first choice for Democratic President, Bernie Sanders. But when he lost the nomination to Joe Biden in the primaries, I created my Biden portrait, whose type reads, ‘Just Biden Time,’ a double entendre on Biden being the last Democrat for President standing, while also referencing how very long he has been ‘biding’ his time being on the short-list of Democratic Presidential hopefuls, for decades.
“Once Biden was the official Democratic Presidential nominee, talk turned to who his eventual Vice Presidential pick would be. Biden committed to running with a female VP, so I immediately threw my illustrated hat in that ring by creating my portrait of Kamala Harris, whom I felt was the strongest candidate for the position (hence my text, ‘…for the win’). Need I add, I was overjoyed when he finally did put her on the ticket months later; vindication is oh so sweet!”