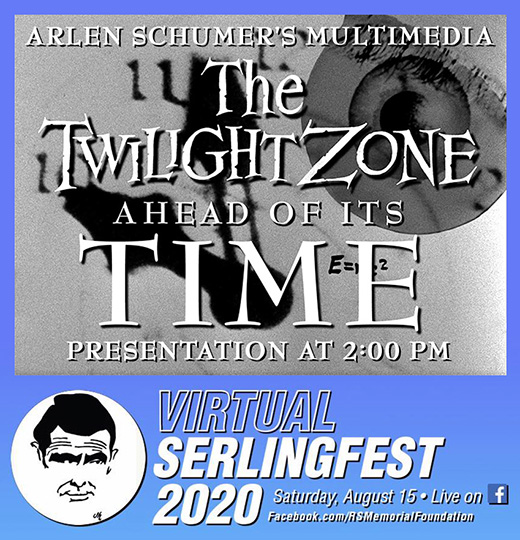 Looking so forward to delivering my THE TWILIGHT ZONE: AHEAD OF ITS TIME multimedia presentation at the virtual SERLINGFEST, Saturday 8/15 @ 2pm EST: facebook.com/rsmemorialfoundation

“We can feed the stomach with concentrates. We can supply microfilm for reading, recreation, even movies of a sort. We can pump oxygen in, and waste material out. But there’s one thing we can’t simulate, that’s a very basic need: man’s hunger for companionship. The barrier of loneliness. That’s one thing we haven’t licked yet.”

Those are the concluding words of Rod Serling — creator, head writer, narrator, and host of the legendary TV series The Twilight Zone (CBS, 1959-64) — said in the series’ debut episode where an astronaut-in-training hallucinates that he’s totally alone in a deserted American town.

If those words sound uncomfortably close to the quarantining we’re all experiencing now, it’s because Serling (1924-75) was a true visionary, a prescient prophet of the small screen, whose many Twilight Zone episodes dealt with the universal, timeless themes of isolation, loneliness, and solitude.

Join SerlingFest & Twilight Zone scholar Arlen Schumer as we embark on a journey through The Twilight Zone–via image and video excerpts–to see how the greatest television series of the 20th Century sheds a prescient light on the global pandemic of the 21st Century.