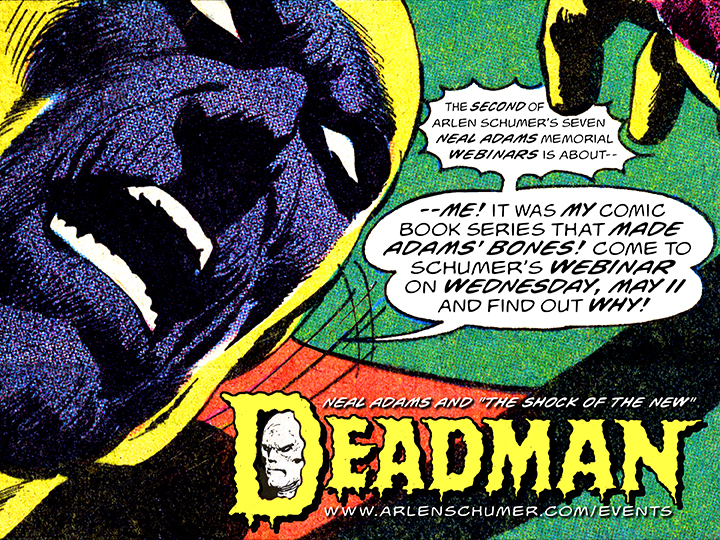 The year was 1967–the year of The Beatles’ Sgt. Pepper’s, psychedelia, and The Summer of Love–and in the comic book field, artist/storytellers Jack Kirby and Jim Steranko were creating mind-blowing sagas that made Marvel Comics surge past rival DC Comics, the lumbering, slumbering industry giant who could no longer count on the Batman TV series to bolster its faltering superhero line, as the bubble of Batmania had long since burst. DC desperately needed someone, something, to somehow stay on a level playing field with Marvel.

That “someone” was 26-year-old wunderkind artist NEAL ADAMS, and the “something” was a brand-new, offbeat “superhero” named “DEADMAN,” a daredevil circus acrobat who is shot mid-swing, and falls to his death–but then miraculously lives on as a ghost with the power to take over living bodies, in order to find his killer! Adams inherited the feature with its second issue, and immediately stunned the comic-reading audience with his startling combination of dynamic, cinematic page layouts and photo-realistic drawing, the likes of which made DEADMAN, ironically, more “alive” than any other comic book character at DC…OR Marvel! When the dust cleared a year later, Adams had made his bones with DEADMAN.

So join comic book historian (writer/designer, The Silver Age of Comic Book Art) and Adams aficionado (editor/designer, The Neal Adams Sketchbook) Arlen Schumer (who also worked for Adams at his Continuity studio, and moderates the Facebook group Neal Adams Almanack) as he takes a deep dive into DEADMAN! Even if you’re a fellow Adams aficionado, you’ll still see his DEADMAN works as if for the first time!