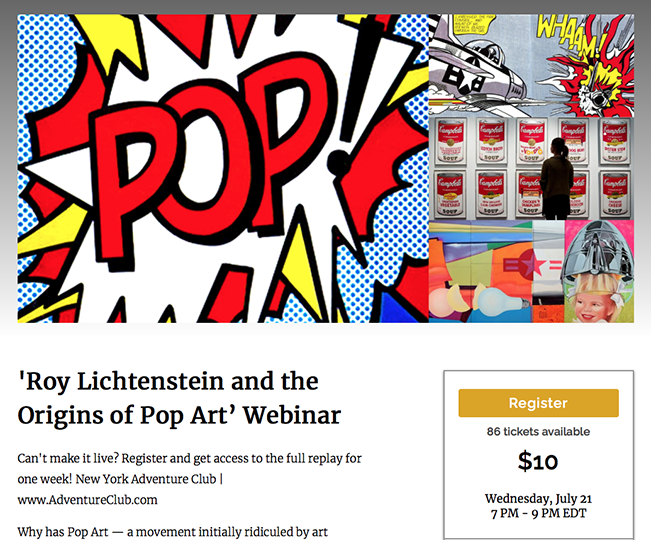 ‘Roy Lichtenstein and the Origins of Pop Art’ webinar via NY Adventure Club!

Wednesday, July 21 7:00pm EDT
Why has Pop Art — a movement initially ridiculed by art critics and historians — outlasted them all to become, arguably, modern art’s most “modern” art? And why is it that works of the premier American pop artist Roy Lichtenstein continue to elicit strong reactions from both his fans and his detractors almost 60 years later? It’s time to explore the life’s work of an artist that has defined the pop art movement for over half a century.

Join New York Adventure Club as we explore the verbal and visual history of Pop Art, and analyze the foundational works and artists that have come to define the modern art style with a focus on those from Roy Lichtenstein.

Led by pop culture historian Arlen Schumer (author/designer, The Silver Age of Comic Book Art), our virtual deep dive into the Pop Art universe will include:

TIX: https://bit.ly/3wAn9fS
•••CAN’T make it LIVE? A ticket allows you to watch a recording of the webinar for up to a week after!