WESTPORT in THE TWILIGHT ZONE live lecture in WESTPORT, CT 7/14 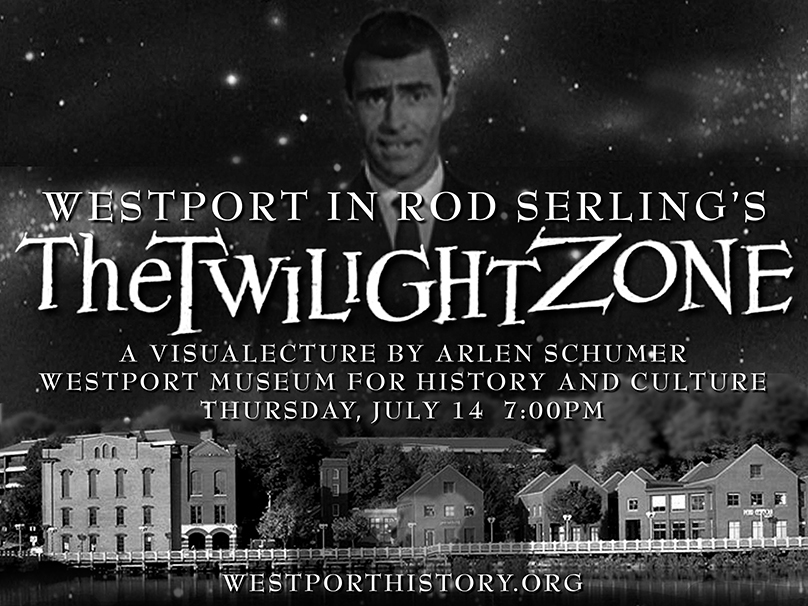 Thursday, July 14 @ 7:00pm EST at The Westport Museum for History and Culture:
WESTPORT in THE TWILIGHT ZONE live multimedia VisuaLecture by Arlen Schumer (author/designer, Visions from the Twilight Zone, Chronicle Books)
It’s well-established that growing up in Binghamton, New York, greatly influenced the later works of Rod Serling, the writer/creator of the legendary television series The Twilight Zone—but little known of the three mid-1950s years Serling spent in Westport, Connecticut, before he moved to Hollywood in 1957.
Yet in that brief time, Serling not only came to overnight success as a television playwright, winning three Emmy Awards in a row, but experiences from those Westport years would resonate years later in some of the greatest episodes of his magnum opus, The Twilight Zone!
So join Twilight Zone scholar Schumer as he takes you on a guided tour, via episode clips and images from both the series and the surrounding popular culture, of an off-the-beaten path that led Rod Serling into…The Twilight Zone!
To watch live and ask questions, register at the link below to receive a link to our YouTube broadcast or join us in person!
https://westporthistory.org/events/chats-on-the-past-arlen-schumer-on-the-twilight-zone/